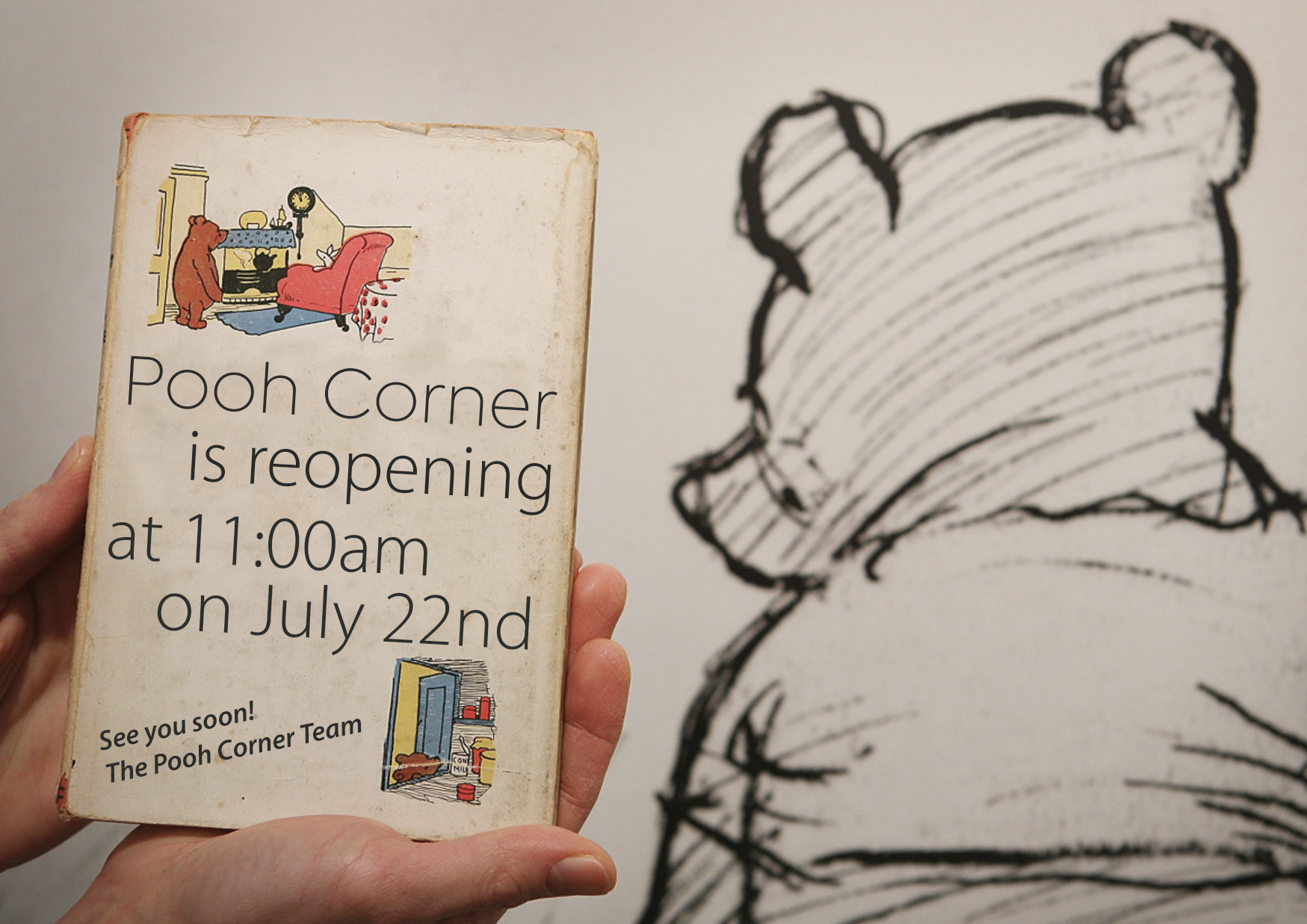 Pooh Corner is situated on the edge of the Ashdown Forest in Hartfield, East Sussex. The perfect stop for either the casual visitor or the die hard fan of A.A. Milne’s most famous creation, Winnie the Pooh and his friends whose stories came to life just a short walk away in the 100 Acre Wood! So whether you come for a drink or something to eat (honey is always on the menu!) you’ll find yourself busy doing nothing in no time!

Our Toy and Gift shop is the perfect place to spend some time, Explore the current ranges from across the world and check out our vintage exclusives that we hand pick for your home. Can’t get to Pooh Corner? Our online store will be live in 2020.

Soon we will have the choice of two rooms, the full out fun Piglets tea room, perfect for the whole family. And for those wanting a meeting space or couples retreat we’ve got the new A.A. Milne room (coming March 2020).

We are delighted to announce that our new Pooh-seum (the worlds first Winnie the Pooh Museum dedicated to the people behind the books) was officially opened by BBC Presenter Gyles Brandreth on December 7th 2019. Gyles was in fact a friend of non other than the real Christopher ‘Robin’ Milne, the most famous small boy in literature. Also present was BBC Presenter Charlotte Wright who reported from the event.

The museum showcases over 100 years of the Milne family, the origins of the story, some original Pooh Bears and some unseen books and photos to help tell the story.

“Subsequent trips included our weekly visit to Hartfield, a mile away along a main road, up a steep hill, down a steep hill and in at the first shop on the left hand side. Jessica (my donkey) needed no urging and the woman behind the counter no instructions. It was a pennyworth of bullseyes for each of us.”

Due to supply issues on our post Covid relaunch, we will have a new menu for the remainder of 2020. Full of some old favourites will remain and some new tastes to enjoy. Our Dairy Ice Cream Milkshakes are sure to satisfy and we cater for all dietary requirements as much as possible with Gluten Free, Vegetarian and Vegan options available.

However this is just the start. As we progress through 2020 we’ll be introducing a larger menu with some amazing new dishes. So please stay tuned…

Check out our Social Media Wall and don’t forget to use the hashtag #poohcorner wherever possible, at home with your favourite bear, or on your walks in the 100 Acre Wood – we love to see your love of Pooh! Visitors to the tea room will also find we also offer free wifi as part of your visit and invite you to share your experience as much as possible.